On Being Spontaneous, Part One

On December 31, 2013, my sister made a New Year’s Resolution.  Because she appreciated where my embrace-the-unexpected attitude had led me, she resolved to be more spontaneous.  I teased her that she didn’t quite seem to have fully grasped the concept when, on January 2, she spontaneously decided to have all four of her wisdom teeth pulled.

Spontaneity has led to some experiences that I will forever treasure, but I have never really thought of it as “spontaneity” at the time.  Except once.

In the summer of 2013, my hiking companion of 1000 miles, Quiver, found himself back on the Appalachian Trail.  (This is a common pattern for many of us thru-hikers.)   That year, a friend of his was doing her thru-hike, and he joined her for several hundred miles in the northeast.  At the time, I happened to live in New England, as I was spending the summer in central Massachusetts in a circa-1790 farmhouse (on 160+ acres) that I was working to transform into an intentional community.  (That’s one of those stories we’ll have to save for another day.)

In any case, when Quiver arrived in Massachusetts, he called me up, and we decided that we should spend a few days together.  A few days turned into a few weeks, and soon the question of what we should do with the time we had together was raised. 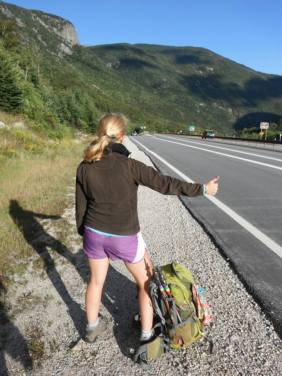 Me, hitching a ride

In response, I started talking about all of the things I liked most about New England that I thought Quiver would also like to see and experience.  Apart from his thru-hike, during which he’d not strayed far from the New England woods, Quiver hadn’t been to New England since he was in his early 20s and hadn’t formed a favorable opinion of it.  I saw this as a problem, and we decided that the best way to rectify this problem was to tour the region.  Being us, we didn’t want to just get in my station wagon and drive around.  No, the best way to see the region would be to stand on the side of the road, wait for New Englanders to allow us to ride in their cars, and then travel with them wherever they were going.  I mean, I knew that 1) we wanted to enjoy Franconia Ridge in New Hampshire again, 2) that I wanted to introduce him to Burlington, VT, and 3) that he had a ticket to a plane leaving from Portland.  Other than that, we had lots of room to be spontaneous.

So, we walked to the other side of the town I was living in, stuck out our thumbs, and began traveling. When we got to Route 2, we’d barely begun thumbing before an old car pulled over to the side of the road. As soon as the car had stopped, the driver got out, and Quiver and I knew this was going to be a fun ride. The driver was a willowy middle-aged woman wrapped in gauzy fabric, and she’d gotten out of the car in order to move her guitar to the trunk.

We ran up to the car and jumped in, and the driver, whom I’ll identify as “U” for the first letter of her name, immediately offered us some wheatgrass to drink. U told us that she’d been “vortexing” (read: driving in circles) all day and that our energy had pulled her to us. While we’d only been looking for a short ride, in order to get to a road that headed north to New Hampshire, U soon began telling us about her intentional community in eastern Massachusetts. Hearing of Quiver and my passion for communal living, she offered to drive us to the community for a visit.

Quiver and I exchanged a quick glance and, embracing spontaneity, enthusiastically agreed to head east.

4 Replies to “On Being Spontaneous, Part One”