Dreaming of Heaters at Muskrat Creek

I’m a quote junkie.  As I lay in Muskrat Creek Shelter shivering on a cold April night in 2012, I knew that Theodore Roosevelt had once said, “Nothing in the world is worth having or worth doing unless it means effort, pain, difficulty…”  But, his words offered little comfort.

If you want to be comfortable, you’re probably not going to choose to spend six months living in the woods; Appalachian Trail thru-hikers are a hardy lot.  However, we all have conditions that we endeavor to avoid.  For many, the heat and humidity of the Mid-Atlantic is intolerable.  Some can’t abide hiking in the rain; others hate carrying more than five days of food.  In my mind, the most difficult days on the Appalachian Trail are the cold ones, and cold nights are worse.

I feel the need to say that I’m a bit less of a pansy these days.  Using the same sleeping bag I’d been in at the Muskrat Creek Shelter, I regularly sleep soundly when the air temperature is below freezing.  But, my having grown tougher doesn’t mean that I can’t remember what it felt like to shiver on that April night. 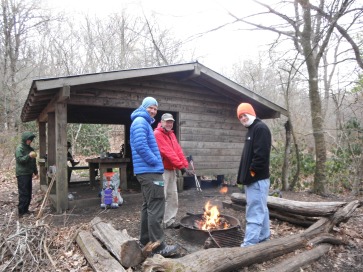 Hikers gathered around the fire at Muskrat Creek Shelter

When I arrived at Muskrat Creek Shelter, I was riding the emotional high of having just crossed into North Carolina, the second of 14 states that the AT travels through.  All day, I’d been enjoying the feeble sun of springtime in the mountains, which kept me warm enough while my feet were moving.  As soon as I stopped hiking, I found myself needing to pull all of my warmer layers out of my pack.

The night I stayed there, Muskrat Creek Shelter was crowded, and several hikers had started a fire by the time I arrived.   The shelter is nestled in a clearing amid rhododendrons, dead branches of which the hikers were burning to stay warm.  No one cared that rhododendrons were mildly toxic; we all gathered around the fire in our warmest clothing and did our best to distract one another from the cold.  Rhododendron leaves droop as the temperature approaches freezing, and, as we stood around the fire, we watched the plants react to the cold.  I stayed in the fire’s warmth as long as I could.

A blurry photo of Manfred and me. He’d asked another hiker to take a picture of us.

Eventually, though, it was time to go to sleep.  Erroneously imagining that it would be warmer in the shelter, where we’d all be able to sleep near each other and off the ground, we piled onto the sleeping platform.  I had a spot between a young guy and Manfred, an older man from Germany.

Clad in a couple pairs of socks, several pairs of base layers, and my rain gear, I willed myself to stay warm.  I tightened the drawstring hood of my mummy sleeping bag tighter around my face, but my exposed cheeks remained numb.  I flipped around in my sleeping bag, putting the face opening beneath my head and suppressing any feelings of claustrophobia.

Finally, I started drifting off.  I’d get just over the brink of sleep and find myself in this wonderful dream:  I was back in my family’s home and decided that the house was a little chilly, which I remedied by turning on the heater and sitting against the vent.  Just as the warm air started to thaw me, I’d wake up.  This happened again and again, until I felt I was near the point of hysteria.  Worse, once I woke up because Manfred sat bolt upright; apparently, I’d tried to snuggle with him in my cold and sleepy state.  It took weeks before he interacted normally with me after that!

In time, the night ended.  The next day was neither sunny nor warm, and I knew that I needed a night off the trail to thaw (and a day to get warmer gear).  Eight people who’d slept at Muskrat Creek agreed with me, and, after a ridiculous amount of effort, we found a shuttle to Franklin, North Carolina.  Little did I know it at the time, but heading into Franklin would completely change my hike.

3 Replies to “Dreaming of Heaters at Muskrat Creek”