An Auspicious Beginning, Part One

In a few days, I’ll be heading south to North Carolina to walk the tiny section of the Appalachian Trail I missed during my thru-hike in 2012.  The prospect of being on the trail again, even if I’m planning to spend only one night in the woods, is so exciting and bringing back all sorts of memories.

I’ve shared some photos from the southern terminus of the trail before — and I’ve written about my voyage to the trail in 2011 — but I thought that tonight I would channel my reminiscences toward recounting the beginning of my thru-hike.

Following my 2011 foray on the trail, I returned to my family’s little hobby farm in Kentucky and got a job as a “Math Instructional Aide” at the local community college to save up funds for my thru-hike.  I continued to read about the trail and enjoyed selecting gear and dehydrating food for my hike.  I also exercised extensively and ran two half-marathons.  In early April, I quit work and focused solely on preparations for the trail.  When April 14th rolled around, I loaded my backpack and trekking poles into the car, and my mother drove my sister, our dog, and me to northern Georgia, where I would begin my five- or six-month adventure the following day.

Kelly and Ohana posed near a white blaze at one of the AT crossings we passed on our drive.

Throughout the seven-hour drive, the car seemed filled with anticipation and nervous energy.  When we left the interstate and started winding our way down smaller roads, Ohana (the dog) asked for the windows to be rolled down.  We all enjoyed the bright, spring green scenery and the fresh air.  Several times, our weaving route took us to trail crossings that I would come to in the days and weeks ahead.

When we arrived in Dahlonega, we were famished.  Mom took me out to an Italian restaurant for the designated “last supper.”  I remember looking at the food on my plate and thinking that in just a few hours I’d be leaving that sort of comfort and luxury behind.  I’d spent a month on the trail the previous year; I knew what it was like out there.  While I felt as though I was ready to burst with excitement, I was also more anxious than I’d like to admit.

In the hotel that night, I barely slept.  Ohana, our 70-pound Canine American, seemed to realize that something was amiss — and, more importantly, she recognized that that something concerned me.  She spent the entire night cuddling close to me, lying on my pillow with me.  It was odd behavior, even for her, and I couldn’t help thinking how much I’d miss her while I was gone.*

The next morning, I couldn’t decide whether I was ready to start hiking or wanting to put it off as long as possible.  But, eventually, all of my gear was double-checked and packed and we were heading to Amicalola Falls State Park.

The southern terminus of the Appalachian Trail is atop Springer Mountain.  There are several ways of getting to the start of the trail, but the time-honored rite of passage is to hike up the eight-mile approach trail, past Amicalola Falls.  And so, on April 15, 2012, I walked into the Amicalola ranger station, signed my name in the register, let my little sister buy some AT swag for me (which she took home and put in my room), and then walked to the stone archway leading to the approach trail.

I worked to blink back tears — whether they were from happiness or sadness, I’m not sure.  It felt  surreal that this dream of mine was finally happening.  I knew that every day of the next 150+ would be worth treasuring and remembering.  I knew that each day would be one I “earned,” although I would not yet have described them in quite that way.  I knew that I’d find myse 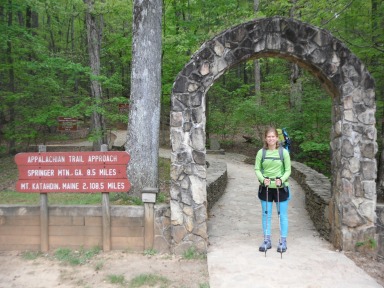 lf lonely, exhausted, discouraged, and aching — perhaps as much as or even more than I’d find myself joyous, inspired, awed, and exhilarated.  Standing under that stone arch, halfway between walking away from all I knew so well and walking toward all that I couldn’t wait to know, it was a lot to take in.

I looked down, not wanting my tears to be caught on camera.  As my vision cleared, I noticed an anomaly in the ground cover near the path: a four-leaf clover.  I’m not a superstitious person, but I couldn’t help feeling that it was a good sign.

And so, I hugged my family, passed under the stone arch, and headed up the trail.

*Incidentally, every time I saw Ohana during my thru-hike, she refused to acknowledge me.  We’ve since made up.

One Reply to “An Auspicious Beginning, Part One”