Before I set foot on the Pacific Crest Trail, I’d imagined that walking through southern California would involve plodding through lots of gently rolling chaparral.  Sometimes that’s exactly what it’s like, but most of the time southern California is full of surprising variety.  That has certainly been the case in the last few days.

After thawing in Big Bear following a snowstorm, Pine Nut and I hiked northward to Wrightwood, where we’d meet Pine Nut’s partner, Little Ant, who was working on healing a nasty case of plantar fasciitis.  The days between Big Bear and Wrightwood sounded miserable in the guidebook, but we were pleasantly surprised time and time again.

The snowstorm had frozen itself into our memory, and Pine Nut and I both spent the first five miles out of Big Bear in awe of sunlight and warmth.  The trail was easy, and the pines and cedars lining it were beautiful.  We camped in a clearing in the hills and woke up to frost on our tents, which blessedly warm sun melted and evaporated as we breakfasted and prepared to hike.

According to my journal, the day was “generally perfect.”  The cedars along the trail were huge, the sky was the sort of Windex blue I’d never seen outside of New England, and, perhaps most astoundingly, the trail we were walking on was dirt — not sand, not rock, but dirt! 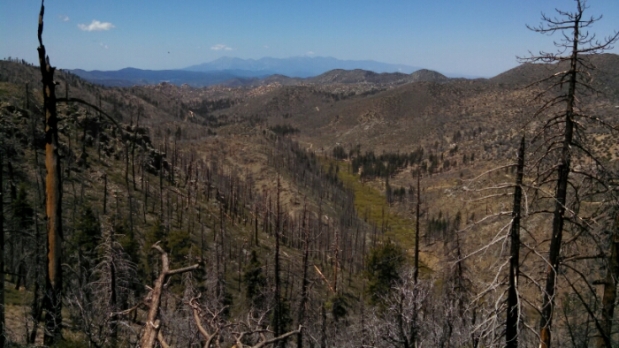 Rounding a corner and looking over an expansive valley, behind which gigantic peaks towered, I was amazed at the loveliness of southern California.  But, then, I looked more closely at the trees rising from the valley and noticed that they were all scorched.  I was staring at the aftermath of an enormous fire, and each of the trees in the valley was a victim.  It was so very sad.

The highlight of the day was Hulcomb Creek, which Pine Nut and I arrived at toward the end of the day.  The stream was cool and clear and riffled; it was shaded by cottonwoods and bordered by herbaceous plants.  I spotted a water penny, a macroinvertebrate found only in healthy streams, under the first rock I overturned.  Hulcomb Creek was perfect.

While the next day involved carrying more water, it also involved looking at a lot of water, as the trail spent miles and miles following contours above Deep Creek.  We took a break from contour walking to enjoy some hot springs, a favorite destination of nylon-clad hikers and unclad locals alike.  Sitting at the water’s edge, enjoying the contrasting sensations provided by the hot springs and the cool creek, I appreciated the natural beauty of the area and the company of the other swimmers and waders.

A rainbow bridge over Deep Creek

The feelings of community persisted that evening, when Pine Nut and I, scared off a ridge by intense desert winds, found ourselves at a large crowded campsite, surrounded by many other friendly hikers.  We saw some people we hadn’t seen for miles and met others who’d been ahead of or behind us until that night.  While I was happy for the hiker culture, I was even more glad about the warmth of the night.

The next morning saw us contour walking on white sand above the Mojave River Valley, which was so green that it looked out of place.  Once we left behind the valley, we found ourselves staring at the sparkling water of and green mountains surrounding Silverwood Lake.  The allure was too great:  Pine Nut and I waded into the water as soon as we came to a beach.  I barely blinked for fear that I’d miss a moment of seeing the landscape around me.

The next day, which took us down to and up from Cajon Pass and toward Wrightwood, was more trying.  It involved an early stop at a McDonald’s that the guidebook listed as the “last on-trail water before Wrightwood,” some 27.5 miles away.  The day also included  around five or six thousand feet of climbing beautiful mountains.  The day was oddly tiring, and coming upon poodle dog bush, a plant whose rash-inducing oils have been the subject of trail horror stories for years, at the end of the day was especially trying.  Pine Nut and I did an awkward dance down the trail as we worked to avoid the poodle dog bush that seemed to be coming to attack us.  We collapsed, exhausted, at the first campsite we came across.

And, then, there was yesterday, when we woke up to a chilly morning of blue sky and puffy clouds.  A couple hours later, the clouds moved in, grew darker, and opened up, letting loose fierce winds and ice-snow of the variety that stings any exposed skin.  Pine Nut and I kicked it into high gear, covering what would have normally taken us six hours in less than five, as we dashed to Wrightwood.

So, here we are, taking a zero day in town with Little Ant as the snow continues falling on the mountains.  We’ve done our errands and spent much of the day eating and watching a mix of the Disney Channel and “Naked and Afraid.”  But, tomorrow, we’ll be in the woods again, heading toward Canada.