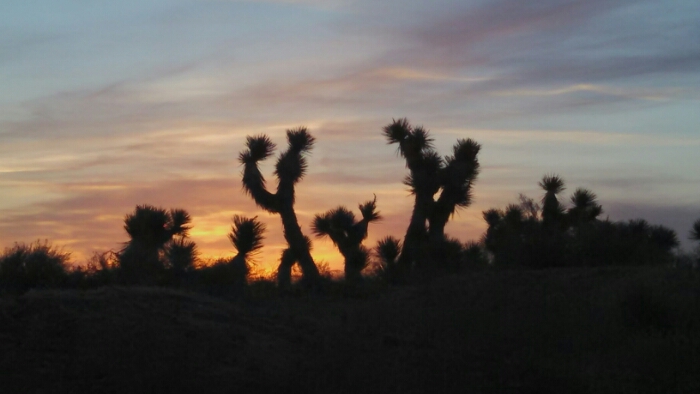 On the PCT: Mojave

On May 27 last year, I was in the hospital in Kentucky.  My day started with a four-hour surgery to correct a congenital kidney issue likely exacerbated by chronic Lyme Disease, and included lots of drug- and Lyme- and surgery-induced haze and panic attacks and pain.

On May 27 this year, I enjoyed a big-mile day on the Pacific Crest Trail.  Pine Nut and I hiked 30 miles along the California Aqueduct, through a windfarm, down into a canyon, and up over the hills south of Mojave. 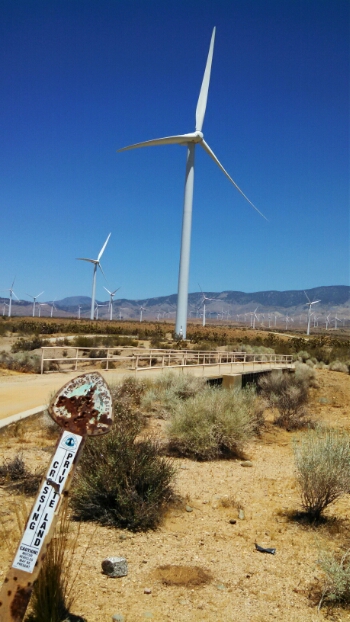 The PCT in the windfarm

Our epic day of hiking, the furthest of Pine Nut’s life and one of my longest, began at 3:00 in the morning, when we woke up ridiculously early to get a headstart on the desert heat. By 4:00, we were winding our way along the aqueduct, struggling to distinguish between PCT markers and signs warning about death to aqueduct swimmers.

By sunrise, we had put in a respectable amount of miles and were glad we did so, as the sun began warming the landscape in earnest.  The colors of the sunrise painted the sky behind the first on-trail Joshua trees we’d come across, and I smiled at the spectacle.

The morning grew hot and then hotter as we followed the closed aqueduct through the desert.  The dirt road and the earthen banks enclosing it acted like an oven, and I felt as though I was being slowly cooked.  Large juniper bushes were a Godsend, and Pine Nut and I cooled off periodically in their shade.

In time, the cement aqueduct led us to a windfarm, through which we then hiked.  Having never seen a giant, modern turbine up close, I marveled at their size, grace, and power.  Fortunately, the turbines were barely moving; while the region experienced 70-80mph winds last week, the air was nearly still when we passed through.  Given that the Mojave area is where valley fever is endemic, I considered the stiflingly still air to be ideal.

On the Appalachian Trail, doing a “12X12” — walking twelve miles by noon — is a goal and an honor.  We blew that milestone out of the water!  By 3:45, we’d hiked more than 23 miles and happily took a long break in the shade of Tylerhorse Canyon.  The squawking Stellar blue jays ensured we didn’t fall asleep, even though the tree cover and trickling water were dreamy.

Eventually, we got up and shouldered our packs again, riding a couple of hiker’s highs up and over some significant climbs as the sun set and the moon cast shadows onto the ground.

When Pine Nut’s phone declared that we were at mile 348.57, we cheered and high-fived each other.  Then, we set about looking for a campsite, as it was three minutes before “hiker midnight.”  At mile 348.58, we came to a side trail that made a rocky and sloping campsite.  Perfect!  (My standards are lower on marathon days.)

Another shot of the windfarm

Happy to be at camp and thrilled at having accomplished such an epic hike, I quickly erected my tent and crawled inside, cozy and content under my quilt.  Needless to say, I slept very, very well.

Before I drifted off, I thought about what a gift and privilege it is that I’m able to be out here.  At my most ill, I wondered whether I’d ever hike again, let alone do another long trail.  When I vowed to hike the Pacific Crest Trail for Lyme Disease research if I could ever again backpack, I thought I was engaging in foolishly wishful thinking.

But, here I am.  Scars on my abdomen, antibiotics in my pack, and memories of a bed-bound year etched into my mind, I’m hiking northward.  Gratefully, I’m putting one foot in front of another over and over again, apparently sometimes for thirty miles in a day.