As I’m writing this, I’m stretched out under my quilt, in my tent, at the base of the tallest mountain in the contiguous United States.  With any luck, by lunchtime tomorrow I’ll be atop it.

Words can’t express my incredulity at being here.  In March, I doubted whether I’d ever be healthy enough to backpack for an extended length of time again; in Warner Springs, I priced tickets back to Kentucky.  And, yet, here I am, in the Sierras, at the base of Mount Whitney. 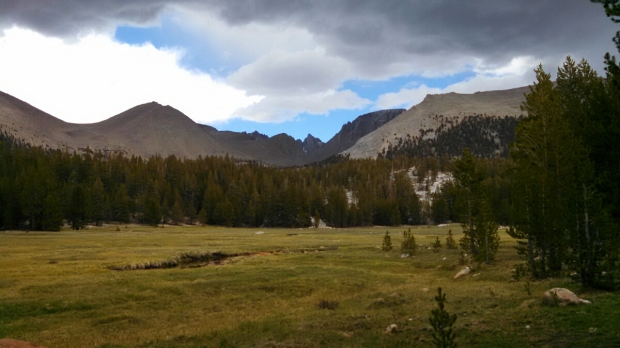 I’m doing my very best to think of tomorrow’s hike up and down Whitney as just another hike, a peak-bagging adventure of the sort I love doing in New England.  But, I know it’s more than that.

Today, Pine Nut and I descended to the meadow at the junction with the Whitney Spur Trail nearly speechless in awe.  Thunderstorms darkened the sky, their thunder resounding in the valley.  Twisted red sequoias rose from the rocky earth, standing guard over the meadow.  In the grass, deer grazed; along the boulders at the forest’s edge, a marmot watched us hikers.

As we made camp and ate dinner, we noticed snow accumulating on the jagged, craggy peaks surrounding the valley, worried what weather Whitney might have in store for us.

On the descent to Crabtree Meadows

This forest is magical, and Whitney is the king of it all.  It’s been the most-anticipated landmark on this hike since before I left Campo, and I’m astounded to be attempting to summit it tomorrow.  I feel grateful, humbled, and — to borrow a phrase from a friend whose Katahdin summit I witnessed — not worthy.