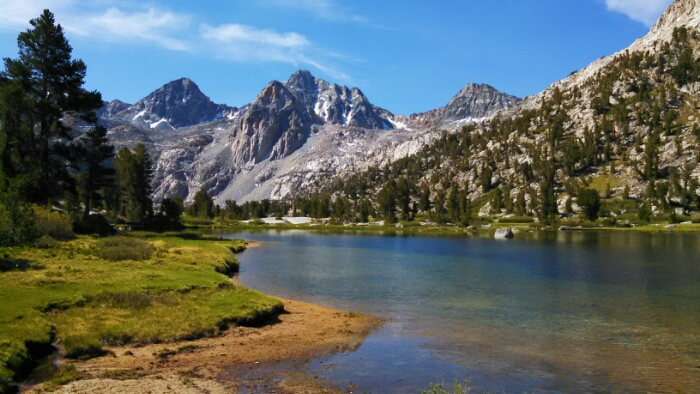 On the PCT: Rae Lakes

I’ve got a confession to make:  I didn’t fall in love with the Sierra.

I really thought I would.  I’d been dreaming of seeing the region’s granite peaks, alpine lakes, high elevation meadows, and giant sequoias for years.  I’d been astonished by the beauty of pictures of the Sierra and listened as dozens of thru-hikers described the way that the region captivated them.  I’d expected that it would be the highlight of my journey.  It wasn’t.

Or, at least, it wasn’t initially.

Hiking north into the Sierra from the desert, I’d expected to be overwhelmed by the green of the mountains, by the abundance of life that would surround me, but that wasn’t the case.  The first several days north of Kennedy Meadows were home to this unique high-elevation desert-treed hybrid.  I imagined that more hiking would take me into the heart of the forests of Central California.  However, the Pacific Crest Trail is aptly named; it doesn’t often traverse valleys, and, as a result, it avoids areas where life is most plentiful.  As the PCT headed deeper into Kings Canyon National Park, I found myself struck by the starkness of my surroundings.

It’s not that there weren’t green things around; there were.  But, there weren’t forests.  The trees were far apart, and there was no understory, even where sunlight reached the ground, which was surprisingly sandy and pebbly.  The scale of the scenery remained expansive.  Granite peaks towered over the trail imposingly, and valleys stretched on for miles.  Rocky paths took us up foreboding mountain passes, bereft of alpine flowers.  I’d thought that when I found myself in the wilderness that once mesmerized Ansel Adams and John Muir I would feel that I’d “come home to a place I’d never been before.”  (Bonus: This is the summer of my 27th year, so it would have been perfect!)

The fact is that the Sierra, beautiful though it may be, is not my home.

This is what I came to appreciate after I, tired and dizzy from Lyme, fell near Rae Lakes, breaking my big toe and spraining my ankle in the process.  Thanks to the help of Pine Nut and two members of a hiking group called “The Fellowship” (who played “Rock, Paper, Scissors” to determine who would carry my pack), I made it 1.6 miles over the next two days.  There, Pine Nut and I set up camp at Middle Rae Lake, where we had easy access to water for drinking and foot soaking, a bear box for storing the scented items that wouldn’t fit in our bear canisters, shaded “durable surfaces” to lay out our tents, and a ranger station 0.4 miles away.

On the day after we arrived at Middle Rae Lake, Pine Nut went to ask the ranger about the nearest exit to civilization, in case I needed to take advantage of it.  After talking with Sam Webster, she returned with details about the trail to Road’s End — and a book to take my mind off my toe, ankle, and progressing relapse of Lyme disease, The Last Season.

Written by Eric Blehm, The Last Season is the story of Randy Morgenson, a backcountry ranger who went missing in the Sierra, just a few miles from our camp.  As I dove into the book, thankful for the distraction, I soon learned the book was so much more than that:  It was the tale of one man’s love affair with the wilderness I was living in.

Without any reason to rush the reading, I savored the excerpts of Morgenson’s journals that Blehm included in his book.  I read Morgenson’s descriptions of the gentian in alpine meadows, the silver bellies of fish jumping out of the water for bugs, the magical alpenglow on the cathedral peaks.  And then, as I sat on a rock next to the lake, alternately soaking and elevating my foot as I read, I witnessed each of Morgenson’s favorite parts of the wilderness firsthand.

I also read about how Morgenson, having dreamed of exploring Alaska and the Himalayas for years, excitedly packed his backpack and realized his dream.  I read of how he was astonished and impressed but how, upon returning to the Sierra, he wondered why he’d ever left, as the mountains he’d grown up near were the mountains that had captured his heart.  It struck me that someone felt about the Sierra the way I do about the White Mountains, and that made me feel fonder toward the wilderness surrounding me.

And, as time went on, I began to channel a bit of Morgenson’s love of the Sierra.

It didn’t hurt that I came to know Middle Rae Lake well as I rested beside it.  I knew the way the shadows moved across the campsite.  I knew the best places to go to avoid mosquitoes and the peaks that shown most beautifully after sunset.  I knew the marmot family that were our neighbors and the chipmunk that came calling every night just before dinner.

A summer spent thru-hiking is characterized by near-constant movement.  Hikers are always hiking onward or heading to town; there are too many miles to hike before the snows come to allow us to stay in any place long.  Because of its rarity, one of my favorite pleasures on the trail is sleeping in the same place twice.  As we took a 1.28-mile nero and two zeroes beside Middle Rae Lake, the Southern Sierra began to feel a bit homey to me.

When it became apparent that I needed medical assistance, I packed up and hiked on, but not without wishing my goodbyes to Rae Lakes.