When I set out on the Appalachian Trail in 2012, fully knowing what I was getting into, I pledged to thru-hike the trail.  However, less than two weeks into my hike, I seriously considered changing my plans.

One of the milestones on the southern AT is the Nantahala Outdoor Center, “The NOC,” in North Carolina.  The day I descended to the NOC, I was high on life.  I spent the afternoon cooling my achy feet in the Nantahala River, sharing photos from some of the beautiful places I’d seen with friends online, talking to a self-proclaimed “Bronie” who was wearing a Rainbow Dash shirt, collecting and organizing my mail drop, and satisfying my hiker hunger in the restaurant in the adventure village.  It was a warm, sunny afternoon, and, while I was a bit overwhelmed by the flurry of activity in the gap, I was thrilled to have made it so far, so fast.

That night, I slept in an otherwise-empty bunk room.

It wasn’t just any thunderstorm.  I’m from Florida, and it was one of the angriest thunderstorms I’ve experienced.  The rain fell hard and quick — until it became hail.  Thunder resounded through the forest.  I kept walking.

Through eyes squinted against the water, I saw the silhouette of another hiker ahead, standing still.  As I passed the old man, smiling ruefully and making some comment about the storm, he grumbled back at me (for no apparent reason other than — just like him — I didn’t have the sense to get out of the rain), “You’re an idiot.”

That wasn’t exactly motivating.  In the time that I’d been on the trail, I’d had so many people make discouraging comments about my hiking.  Other hikers suggested that I only section hike (rather than thru-hike) or told me that I needed to hike fewer miles each day.  Even park rangers and ridge runners told me that my aspirations were too great.  Apparently, “little girls” like me just couldn’t hike the whole trail, let alone hike it quickly.  I’d been rolling with the punches, but the combination of the man’s comment and the storm were too much for me that morning.

After I’d hiked past him, I started to cry.  Suddenly, everything was wrong.  I was going uphill in the rain in the wrong frame of mind, and I wanted desperately to quit the whole endeavor.  I considered turning around and heading back to the NOC, but my cell phone reception had been abysmal there, so I hiked onward in the hopes that some elevation would help.  On three different occasions during my ascent, I set down my pack, took out my phone, and tried to keep it dry enough to insert its battery and turn it on so that I could call my mother and ask her to pick me up.  Every time, I decided against it because I couldn’t seem to keep the phone satisfactorily dry. 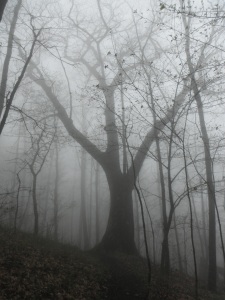 A wolf tree in the fog

Eventually, I made it to the top of the climb.  I enjoyed an overlook from which I saw the clouds racing by below me, and then I kept walking north.

Soon, I could barely see 40 feet in front of me.  The forest was shrouded in a thick mist, and I hiked through the dense fog, mildly disoriented.  As cold and dispirited as this young biologist was, I couldn’t help appreciating the way the mist seemed to celebrate the dramatic statures of wolf trees.

Soaked through and shivering, I stopped at a shelter for a snack break and a chance to sit somewhere dry.  There, I found two hikers, one of whom had waited out the storm in the shelter.  As per usual, we started chatting about the trail and the woods ahead.  I conversationally mentioned that I needed to make it through the Smokies in four days so that I could attend my sister’s graduation; my plans were immediately scoffed at.  Since these male hikers wouldn’t be hiking that quickly through the Smokies, there was apparently no way that I could either.  I stuffed the remainder of my snack in my pack and headed back to the trail, thoroughly fed up with mansplaining.

The fog and light rain persisted for rest of the day, and, having not seen other hikers since leaving the shelter, I was cold, wet, and alone.  In [title of show], a fun and clever musical, there is a wonderful song about the “vampires” that attack us when we are at our most vulnerable and work to drain and discourage us.  I had a whole host of vampires walking with me that afternoon, and I knew it.

That’s why, when I rounded a bend and found a tall and friendly hiker I’d seen a couple days earlier in town, I stopped to join him in his standing break.  That’s also why, when he asked me how I was doing, I blurted out, “Not so good.  I’m actually having a really bad day.  I got poured on earlier and this old guy told me I was an idiot and no one thinks I have any business being out here and I can’t seem to find anyone who hikes at my pace or who I want to hike with and this other guy won’t leave me alone and I just think I might actually go home soon but I really don’t want to.”

He invited me to take the lead and walk with him for a while.  As the trail turned rocky, the likes of which I hadn’t seen since hiking in Pennsylvania the year before, I did everything I could to keep up the pace on the rain-soaked, slippery rocks.  If anything, I hiked faster on the wet rocks, even though I was tired and hungry; I wanted to demonstrate that I was a worthy hiking companion, one who wouldn’t slow down a fast hiker.  In retrospect, I don’t think that was necessary. 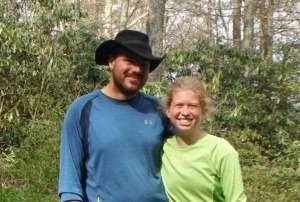 In our first two hours together, Fanny Pack (as my companion was known at that time) and I discussed politics, religion, our families, relationships, sexuality, aspirations, and other assorted topics that one is not usually advised to broach with new acquaintances.  When we came to a road crossing before Jacob’s Ladder, Fanny Pack decided to make camp.  I asked whether I could join him for the night, and he welcomed me.  As the rain continued to fall, we continued to talk, him in his bivy and me in my rain gear, outside my little tent.  I planned to head out the next morning alone so that he wouldn’t feel obligated to hike with me, but it was readily apparent that we were fast friends.

I woke up the next morning to a beautiful sunrise, the vocalizations of turkeys, and a “good morning” from my new friend.  Quiver, as I renamed him (because his homemade pack looked more like a quiver than a fanny pack), and I would spend the next 1000 miles together. 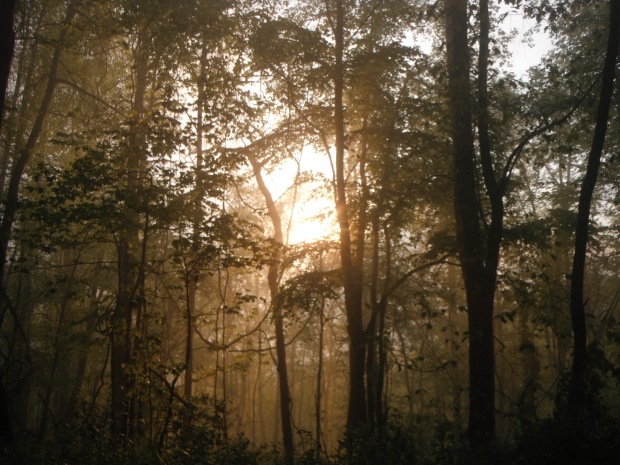