A Plague of Locusts

In Kentucky, it seems as though we’re forever hearing that each coming summer will be a big cicada year, a year when an uncountable number of the adult insects, which have lived underground for 13 or 17 years as nymphs and are often called jarflies or locusts (the latter erroneously), will emerge and flood the summer breezes with their “song.”  We hear about cicadas so often because several colonies of the insects have ranges that overlap in our state.  As a result, I am almost fond of the insects and think of them as an essential part of summer.  However, my interactions with cicadas in Kentucky don’t begin to come near what I experienced of them on the Appalachian Trail.

The year I thru-hiked the AT, 2012, was expected to be a big cicada year in Virginia, but I found that I could not have imagined what that meant before I found myself in Virginia when billions of the adults emerged to moult, mate, and lay eggs.  These cicadas were members of the Blue Ridge Brood, which won’t return to the surface until 2029.

It wasn’t that I hadn’t been warned.  I had.  But, I’d paid so little attention to that news that it wasn’t until I’d been hearing moderately loud cicada song for a few hours that I remembered the warnings. 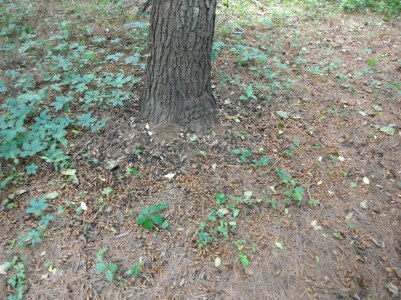 Cicada carcasses under a tree in Virginia

You see, the first of the cicada song was familiar and brought to mind images of summers on my family’s farm.  Then, the brood really started its so-called “congregational singing.”  As I walked through the forest south of Troutville and Daleville, Virginia, the cicada song grew to an almost-deafening volume.  At first, it seemed possible to discern the location of each singing swarm; in time, the entire forest seemed to vibrate with the sound.  It was like walking past incredibly loud, buzzing power lines all day.  There were moments when the sound would recede into the background, but there were other times when it seemed to be the primary sensation I was experiencing as I walked.

As I continued to walk north, this sound persisted in the air for a week or so.  Then, just as quickly as it had come, it dissipated.  In its wake, carcasses of cicadas littered the ground, creating piles beneath the trees of southwestern Virginia.

I’d never seen anything like it.  But, to be honest, recollecting that biological event makes me want to return to that section of the trail in 2029.

One Reply to “A Plague of Locusts”